Skylake is the codename for Intel’s latest (6th) generation of desktop CPUs. With it, comes a host of new benefits to the whole PC system, not just the CPU itself.

The main benefits come from the corresponding Skylake chipsets which you will find on any new Skylake-supporting motherboard.

For those of you new to this, the Core-i7 is Intel’s flagship desktop processor aimed for the most CPU intense workloads. These quad-core processors usually feature more cache and are capable of Hyperthreading – allowing compatible applications to use additional logical cores. (Edit: the release of the Core-i7 6498DU in Quarter 4 of 2015 has introduced a new dual-core i7).

Core-i5 CPUs boast many of the same features as the Core-i7 but typically don’t include as much cache or Hyperthreading. These are often seen as the sweet spot for those who don’t require Hyperthreading.

Core-i3 is the next step down and is considered Intel’s premium dual-core processor, usually including Hyperthreading and many of the same features of the Core-i5 and Core-i7. The Pentium range fits in below the Core-i3.

(Edited October 2016 to include additional releases by Intel)

With Skylake, Intel have released several versions of each processor :

The regular/mainstream series – All of the standard features and clock speeds.

The “K” series – Unlocked version allowing users to manually overclock the CPU. This version also comes with a slightly higher default clock speed, higher TDP and does not include a heatsink – you must buy your own aftermarket heatsink to suit your needs.

What’s the advantage of Skylake?

While the Skylake CPUs do provide a reasonably small improvement of the previous Broadwell generation, the more attractive improvements come as part of a the whole system package.

Intel have released 6 chipsets, listed below in order of feature set/price point (starting from low end to high end):

All of these motherboards support DDR4 memory, giving you the benefits of lower power consumption, less heat, and a higher clock-speed to cost ratio compared to DDR3 RAM.

This new range of Skylake chipsets brings a range of great motherboard features (e.g. slot connectivity, ports, buses)  to an affordable price bracket. Amongst these, features on some of the Skylake chipsets include: USB3.1, Thunderbolt, M.2 slot, etc.

We decided to take a closer look at one of the higher end Z170 chipset motherboards to see this in practice. 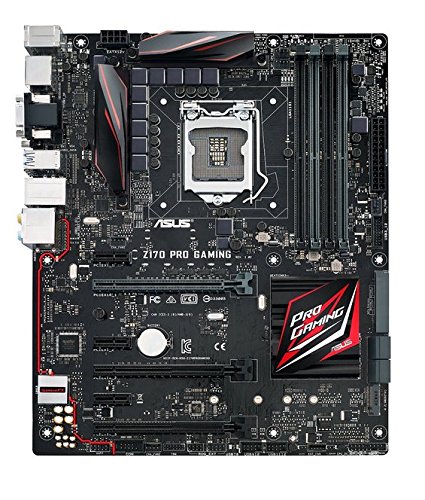 The new Z170 chipset motherboards support on board PCIe M.2 SSDs in a dedicated PCIe 4x slot which mounts parallel to the motherboard making for a convenient and neat installation. These new SSDs are advertised with read speeds of over 2,000MBps – compared to a high end SATA attached SSD (550MBps), this is very impressive.

DDR4 RAM – Some manufacturers are supporting up to 4000MHz DDR4 RAM. For those who require a large amount of memory bandwidth, Z170 can offer it at a reasonable price point, and with lower voltage that DDR3!

More PCIe lanes, USB 3.1 and Thunderbolt support. While some of these features were available in previous chipsets, such as the Broadwell x99, these new Z170 boards will bring them to the mainstream audience and a more affordable price point.