In this review, we’re going to take a closer look at CyberpowerPC’s Gamer Ultra GUA880 Prebuilt computer. This appears to be a pretty popular off-the-shelf gaming computer, so we thought we’d investigate what hardware you get with it, and how you can expect it to perform.

We’ll also take a look at how the GUA880 compares to another prebuilt gaming machine offered by CyberpowerPC for a similar price – the GUA3100A (which we’ve previously reviewed here).

The Gamer Ultra GUA880 is another prebuilt computer  by CyberpowerPC that comes complete with keyboard and mouse, and as you can probably gather from the name, is marketed as a gaming PC. The tower case comes complete with blue case lighting and a clear viewing window that allows you to see inside the case.

The keyboard and mouse that complete this package are the same as those used in CyberpowerPC’s GUA3100A gaming computer package and have red highlights, which matches the GUA3100A case lighting but not the blue on the GUA880.

Like the GUA3100A, this computer is definitely an entry level machine. We’ll come right out and say it up front: you can get much better performance value for money by building your own computer as you can put in better parts for your dollar. However, pre-built packages like this GUA880 may suit those who just want a out-of-the-box gaming PC without worrying about trying to assemble it yourself.

As with all desktop computers, you still have the ability to upgrade this PC if you choose to do so.

First let’s take a look at the hardware in this PC to see how it performs. When it comes to value for money, you can definitely get much better performance for your money by going with the parts listed in our $500 gaming PC build, but if you aren’t confident with assembling your own computer then your only real option is a prebuilt PC.

When comparing the GUA880 to CyberpowerPC’s other offering (the GUA3100A), it looks like the two computers are identical in terms of parts, apart from the graphics cards in each of them.

The processor used in the GUA880 is the quad-core AMD FX-4300 which has a clock speed of 3.80GHz and up to 4.0GHz on Turbo boost. This processor performs okay, but only scores about two-thirds as well as the latest Skylake Intel i5 CPUs as shown in the benchmark test results below.

Now let’s look at graphics, one of the big-ticket items for a gaming computer. CyberpowerPC have fitted out the GUA880 with the NVIDIA GeForce GT720. To be quite honest, the performance of this graphics card is pretty poor as it is a lower end graphics card and also a couple of years old now (released in March 2014).

To put this into perspective, in simulated benchmark tests the GeForce GT720 scores worse than integrated graphics that you can get on the latest Intel processors (see below). Theoretically this means that a prebuilt computer like the ASUS M32CD with 6th generation  i5 processor will perform better than the GUA880, despite the M32CD only having no graphics card and only onboard graphics. Based on our look at the graphics card and CPU so far, a prebuilt offering like the ASUS M32CD is coming out on top (and it actually retails for a cheaper price too).

Having a dedicated graphics card does have its advantages though – for instance if you have a separate graphics card, it has it’s own dedicated memory that is available for use. If you are using on-board integrated graphics instead, you miss out on this additional memory on the graphics card and your system’s RAM is used instead. In this case the GeForce GT720 has 1GB of on-card RAM. This advantage of the GeForce GT720 might not be well reflected in the benchmark (simulated only) scores below.

For system memory, the GUA880 has two 4GB sticks to give a total of 8GB of 1600MHz DDR3 RAM. Our $500 gaming build (as well as the ASUS M32CD) also has 8GB of RAM but it comes in a single stick which has the benefit of being immediately upgradeable. The motherboard in the GUA880 will support up to 16GB maximum, but if you want to do any RAM upgrades you’ll need to lose one or both of the 4GB sticks first to free up some slots.

In terms of storage, the computer has a 1TB 7200rpm hard drive. 1TB of storage is pretty huge and will keep you going for a long time. There is of course plenty of room left in the case to add extra storage drives should you choose to further down the line.

Speaking of the case, CyberpowerPC have used the Cooler Master Elite

, and fitted it out with blue case fan lights that definitely make it look like a gamer’s PC.  You also get a read/write DVD optical drive with the package which is a bonus if you’re still installing games via disc.

Here’s a good look at the CyberpowerPC Gamer Ultra GUA3100A in the below video:

The hardware in this PC is decent and although it is a little dated, you’ll find that the quad-core processor, 8GB of RAM and dedicated graphics card with an additional 1GB of on-card RAM means that the GUA880 can handle low to medium gaming quite well. Bear in mind that the NVIDIA GeForce GT720 is a lower end card, so you may struggle with playing more demanding games on high settings.

One of the best selling points about this PC we think is the Cooler Master case, which CyberpowerPC have done a good job of kitting out with blue case lighting and the few fans that it comes with are sure to keep your components running cool. 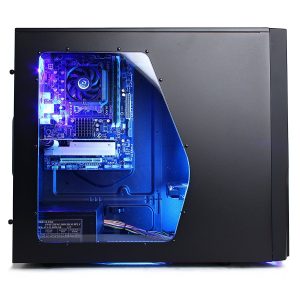 If you plan on using this PC for entry level gaming as well as general tasks like internet browsing, watching videos, and the like, the GUA880 will handle these tasks with ease.

We decided to check out how the GUA880 performs in some common games. As we mentioned earlier, the GT 720 graphics card that the GUA880 comes with is not the best, but users have reported that it can play the following:

To give you some real-life examples, here are some youtube clips of the GUA88o playing a few different games:

Due to the lower-end GT 720 graphics card, don’t expect to be able to play on high settings for all games. It’s likely you’ll end up experiencing some lag or low frame rates on the more demanding games.

You can however do a graphics card upgrade to this computer as it’s a decent starting base. We recommend upgrading the power supply as well as the stock PSU is reportedly a cheap and low-quality unit that can potentially damage the rest of the computer’s hardware.

The GUA880 can support up to 3 displays from the GT 720 graphics card. The three output ports from the graphics card are: one Dual-Link DVI-D port, one HDMI port, and one VGA port.

Serious gamers will likely want to upgrade the GUA880 as the default GeForce GT 720 graphics card that it comes with really doesn’t perform all that well (it’s about on par with some of the latest Intel processors on-board graphics modules).

Some of the most common upgrades that most people do to the GUA880 include a new power supply, more powerful graphics card, and a wireless adapter.

For those thinking of upgrading this PC, we’ve compiled a full list of specifications at the end of this article which will be a good reference point.

When considering future upgrades, you will want to keep an eye out for available motherboard slots and I/O capabilities.

One issue that we did notice when researching this computer is that the ‘Turbolink’ power supply that CyberpowerPC use in this build is of a very low quality. A bad power supply can damage your computer hardware, or even shorten it’s lifespan. We would recommend swapping out the power supply for a more reputable brand as soon as possible.

The GUA880 appears to be an Amazon offering (only available through Amazon) and we couldn’t find any official specification on the GUA880 by CyberpowerPC – it is not listed on their official website.

After some research to determine the exact specifications of this computer, it does appear that the actual hardware you get can vary, since CyberpowerPC basically assemble these computers themselves and may update their hardware from time to time. After piecing together several different Amazon reviews and questions, we’ve seen that there does appear to be variation in parts used by CyberpowerPC over the years, e.g. motherboards, graphics cards. This is a definite downside from our perspective, as you may not know exactly what you’re getting.

The specifications below are based on the best information available on this product that we could find at the time of writing.

CyberpowerPC appears to use different motherboards in this computer. We have seen user reports of the following motherboards being used in this PC:

The computer is advertised with the following connectivity options:

The specs below are for the MSI 760 GM-P34 FX motherboard, which we believe is the most recent offering. If the particular motherboard used is important to you, we’d recommend confirming this with the seller before purchasing on Amazon.

Details above were taken from here.

The Gamer Ultra GUA880 PC does seem to be an entry level choice that most people end up happy with, but after looking at the hardware that it comes with, we think you can definitely get better performance value for your money. The graphics card in the GUA880 is a low-end card, there is no in-built wireless connectivity, and you’ll need to upgrade the power supply if you want to protect your purchase. We think a better option may be to start with something like the M32CD prebuilt and put in a dedicated graphics card for a similar price to the GUA880 package. If you’re really keen, for even better bang for your buck you can always build your own gaming computer from scratch by following our $500 gaming PC build.

That being said, for entry level gamers who are looking for a nice-looking prebuilt computer, the GUA880 does function at an acceptable level for less demanding games. We do recommend a graphics card and power supply upgrade if you plan on running some of the more recent titles and want to get decent frame rates though.

Now, if you are able to save a few extra hundred dollars to add to your budget, CyberpowerPC do also have what we think is a very epic deal for a gaming PC that is leagues ahead of the GUA880 when it comes to graphics performance. For around $720, it may be worth checking out. If this sounds like something you may be interested in, check out our full review of the CyberpowerPC GXiVR8020A here!

Click here to check out the GUA880 on Amazon